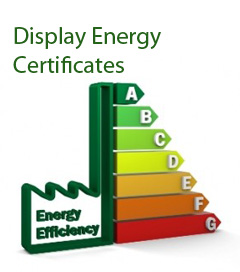 Whereas an EPC reflects the energy efficiency of the building fabric and the systems, Display Energy Certificates (DECs) reflects how efficiently the energy is used in the building. DECs are required for public buildings over 1000m2 in area and need to be produced every year. The certificate needs to be displayed in a prominent place in the building so that visitors can easily see it. The Certificate reports on the previous three years so that improvements in energy use can readily be seen on a year on year basis.
Energy Assessors will be accredited by Sterling to undertake DECs and the accompanying Advisory Report that provides the building owner/user with information on how improvements can be made.

Why DECs are required?
The purpose of introducing DECs is to raise public awareness of energy use and to inform visitors to public buildings about the energy use of a building. DECs provide an energy rating of the building from A to G, where A is very efficient and G is the least efficient and are based on the actual amount of metered energy used by the building over the last 12 months within the validity period of the DEC.
An affected organisation must display a DEC in a prominent place clearly visible to the public and have in its possession or control a valid advisory report. The advisory report contains recommendations for improving the energy performance of the building.

When DECs are required?
From 9 January 2013, if you are an occupier of a building requiring a DEC, you will need to display a DEC showing an operational rating in a prominent place clearly visible to the public. You will also need to have in your possession or control a valid advisory report.
If you are a new occupier, or have been in occupation for less than 15 months by 9 January 2013, you may not have the previous 12 months of meter readings available that are required for an operational rating. The legislation makes provisions for calculation over the period of occupation in these cases.

What a DEC contains
A DEC must contain, by law, the following information:
•the operational rating as determined by the government approved operational rating methodology
•a reference value such as a current legal standard or benchmark
For buildings with a total useful floor area greater than 1000m² only, the DEC must also contain:
•the operational ratings for the building expressed in any certificates displayed by the occupier during the last two years before the nominated date. In buildings where no historic energy consumption data are available, this information will not be complete until the third year of occupation after the introduction of DECs for that type of building as it will be derived from previous DECs
The DEC will also show the unique certificate reference number under which the DEC has been registered, the address of the building, the total useful floor area of the building, the name and address of the energy assessor, the name of their accreditation scheme and the date when the DEC was issued.